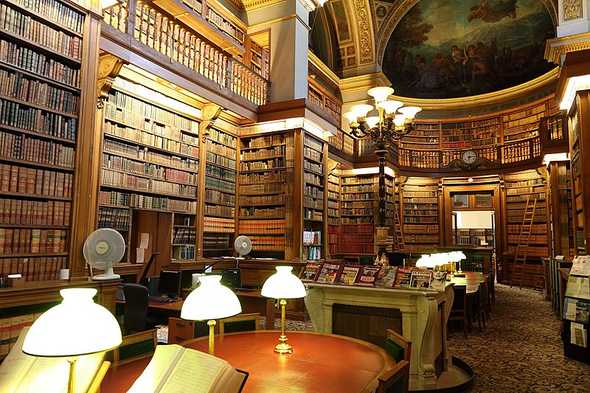 The Library of the Palais Bourbon in Paris
File copied from Wikipedia under the Creative Commons Attribution 2.0 Generic license. [source]

TypeScript’s tsconfig.json compiler options allow us to specify what global type definitions to compile with. They default to the built-in "dom" typings as well as whatever your "target" compiler option specifies:

You might, for example, ask to have "dom" and "es2018" global types included regardless of your target:

These get a little tricky. "dom" is included in the default settings when you don’t specify your own "lib", but not if you specify a custom one without it. If you don’t include "dom" in the list, type definitions for global DOM elements such as HTMLElement won’t be included.

Most projects for code that run in the browser will generally want to include "dom". Not including "dom" makes sense for projects that execute in a context without the DOM, such as Deno or Node. You wouldn’t want someone thinking they have access to global values such as document if they might not exist.

Some library typings -including the ever-popular @types/react- include stub interfaces so that they can be included in non-DOM projects and still refer to those element types.

It worked in the following manner:

Confused by that regular expression? You and me both! Skip to the bottom of this post for an explanation.

I tried out that branch locally and ran it on some violating code.

Kyle’s PR had been given feedback but never addressed it before aging away. The main changes requested were around that isEmptyDomInterface function:

I really wanted this error message improvement. Time for me to dig in! 💪

Looking over the original PR, I noticed that the isEmptyDomInterface function didn’t check what the compiler options for lib were specified as. I figured it’d be a good idea to add in logic to restrict the new error message on the off chance that someone with "dom" in their lib was making their own custom interfaces that happened to match the name matching.

Question: how to check compiler options in checker.ts?

I ran a text search for compiler.*options in the file and found a bunch of references to a compilerOptions object. Good good.

The original PR used a typeToString method to convert the original container type’s name to a usable string, but I was worried that that strategy was inefficient and/or didn’t work at all for union and intersection types. For example, this type should still trigger the complaint, even though its name string is complex:

I ran some text searches for names like every.*type and didn’t see any existing utility function to check that every contained type in a union or intersection matches a function. So I wrote my own:

Now that I was testing against individual type names, I simplified the regular expression a bit:

Confused by that regular expression? Skip to the bottom of this post for an explanation!

Comparing my notes to how the original PR implemented empty element detection, I wasn’t sure what the best way to determine whether an element is empty. The original PR used isEmptyObjectType but I’d previously seen a getPropertiesOfType function and used it in my own function.

I also didn’t understand the request to not use a regular expression. It seemed reasonable to me that we’d use some kind of string-based logic to detect names matching HTML*Element.

I sent a new PR and asked about the regular expressions and empty object detection.

The first review feedback I got was pretty easy to resolve. Do you see the difference?

The responses to my questions were pretty straightforward:

It was also mentioned that I didn’t need to call toString() on type.symbol.escapedName, since that’s already a string.

I used unescapeLeadingUnderscores for Ultimate Correctness to sanitize that string.

Applying all the feedback:

Confused by that regular expression? Skip to the bottom of this post for an explanation!

The original proposed diagnostic message addition looked like this:

One piece of feedback requested using a consistent quoting style. It was noted that other diagnostic messages don’t have a consistent style; for now, we went with single quotes consistently.

#43503 Error messages inconsistently use backticks and single quotes was filed to later resolve the general inconsistencies.

I pushed the requested adjustments in the PR and re-requested review. It was merged in within a day. Yay! 🎉

Thanks to @kylejlin for sending the first version of the PR and to @DanielRosenwasser and @sandersn for the PR reviews (as well as introducing me to the excellent phrase “Ultimate Correctness”)!

Regular expressions can be tough to read if you’re not familiar with the syntax! A regular expression, or “regexp” for short, is a description of what characters to check for, in order, from a string.

Next, this regular expression shows off groups and ranges. The | pipes indicate that the content must be any of:

That last one is what matches Element, HTMLElement, and all other names such as HTMLAudioElement that have characters between HTML and Element:

Putting them all together, this regular expression is another way of testing for the name EventTarget, Node, Element, HTMLElement, or HTML + (some alphabet characters) + Element.

Putting them all together, this was another way of testing that the type has, in order: